In fact those of the Megarian Decree stretch back nearly two and a half millennia, as referenced by the US State Department's Dr Daniel Ahn at our recent AML4 and sanctions compliance forum. But they've evolved to become far more sophisticated – and with that, harder to comply with.

This has been indisputable in recent years, since the US Treasury's Office of Foreign Asset Control (OFAC) has been issuing Specially Designated Nationals (SDN) and Sectoral Sanctions Identification (SSI) lists. The European Union (EU) publishes similar lists of "persons, groups and entities subject to EU financial sanctions", which overlap but don't fully coincide with OFAC's lists.

The situation has intensified in the unfinished aftermath of the Crimea crisis of 2014: the lists have started growing more quickly; sanctions have become even more targeted; and enforcement agencies have moved up a gear in their work – much of which our databases have helped to demonstrate the economic efficacy of, as demonstrated in US government-sponsored research.

And, crucially, this is on top of the OFAC and EU "50% rule" and the concept of being "sanctioned by extension", the focus of this blog post.

Companies that are sanctioned by extension don't appear on any of these lists. But the embargo on trading with them is just as real and the consequences are as severe if you're caught.

Given the cross-jurisdictional and complicated nature of corporate ownership structures – many of them with periodically changing ownership percentages between layers – it's hard enough just identifying companies that have been sanctioned by extension, let alone monitoring those that slip in and out of the critical parameters for inclusion.

But we've developed a dynamic new tool that does just this.

First, though, a quick explanation of what the 50% rule is.

The basic concept is relatively straightforward, as illustrated in the diagram below. 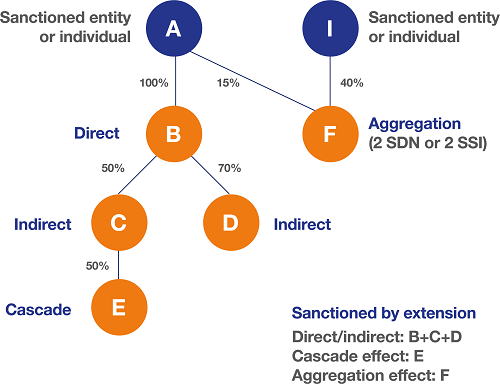 A company is sanctioned by extension if each of the ownership links in an unbroken chain between it and an explicitly sanctioned person or entity is 50% or more.

The number of layers between the explicitly sanctioned entity and the focus company determines whether the sanctioning by extension is direct (one level), indirect (two levels – or more if the "integrated ownership" still exceeds 50%) or indirect but through the "cascade-down effect" (three or more levels, where "integrated ownership" is less than 50%).

The exception to the "straightforward" explanation relates to "aggregation", as shown by Company F in the diagram. Here, neither of the sanctioned owners owns 50% of Company F individually. But they exceed the threshold in combination, hence Company F is sanctioned by extension despite A and I having nothing to do with each other apart from their shared ownership of Company F.

Given the potentially unlimited number of links in a chain, each reducing "integrated ownership" (see the resources below), it's interesting to note that a sanctioned person or entity's total indirect ownership of another company is not that important. What is important is control.

So how difficult is it to establish control and monitor it?

The scope and complexity of the problem OFAC's jurisdiction is the United States. And the EU's is the EU. But given the globalised nature of trade, their lists effectively apply to all multinational corporations; this increases the scope of the problem. Complicating the problem further is the twofold nature of change, namely:

So we're looking at a situation that, for companies with many clients and third-party companies in their portfolio, is extremely difficult to manage either without occasionally letting rogue clients and third parties slip through the net or without investing a lot of your researchers' time into screening companies using often hard-to-refine risk-based approaches.

But help is at hand.

How Bureau van Dijk can help

Tapping into our vast repository of structured corporate ownership information, we've developed a computation that generates snapshot lists of companies that at that point in time are sanctioned by extension.

We cover OFAC's SDN list and its SSI list, as well as the EU's sanction list. But, in line with OFAC's rules, we process them separately to produce three separate spreadsheet lists of companies sanctioned by extension.

We can then bundle these together in zip files on an FTP server for customers who order them, with each spreadsheet including: As the customer you can choose the frequency of list update, and your screening tool – which also has access to your portfolio data of matched entities – can be set up to automatically access the latest update.

You can also feed selected datasets into Ownership Explorer on the new Orbis interface to better visualise how each indirect sanction has arisen.

All of which delivers a welcome switch from pro-active to partially reactive and automated initial sanctions screening.

We have a number of related resources, which you can download for free: Measuring smartness: understanding the economic impact of targeted sanctions is a working paper co-authored by Daniel Ahn (see above).

Tasked by the US State Department and equipped with a rich bank of structured data from Orbis, the Office of the Chief Economist set out to address whether sanctions imposed on targeted companies had a measurable effect on their financials.

As well as demonstrating the power of Bureau van Dijk's databases in identifying sanctioned entities and individuals across borders, the working paper that arose from their rigorous work makes fascinating reading, and among other thing includes:

We also published a blog post on this research earlier this year. We ask what sanctions exactly are, who controls them and how you can find out whether the companies you're working with are sanctioned, either directly or indirectly. 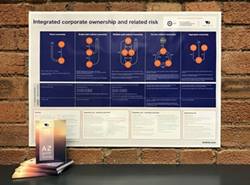 These twin resources are available digitally and you can also order free printed copies.

Our Integrated corporate ownership and related risk poster helps you understand complex corporate ownership structures within the context of different fields of compliance. The poster, which is A2 in size (42.0 x 59.4cm), sticks to any flat surface using static electricity, so it doesn't need pins or Blu-Tack, and can be easily moved.