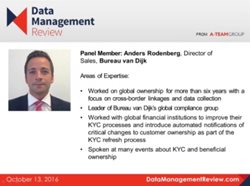 Sarah Underwood of the A-Team Group – the company behind Data Management Review – chaired the discussion, asking questions on:

Rodenberg kicked off with the assertion that "integration has become a big focus for the past five years, and it's good to see people paying attention".

CEO of iMeta Technologies, Ben Marsh, agreed, suggesting that while there's "maturity and diversity in the process and some of it is automated, some is siloed in a manual way".

"Even fully advanced banks need to make improvement," added Alacra's VP of compliance solutions, Kelvin Dickenson. "Technology was put into place years ago and it [often] doesn't keep up with the evolving data landscape and regulations." Connecting systems together was another significant challenge he identified.

All three panellists highlighted the need to bring external data from companies like Bureau van Dijk into the picture. And they identified two other key sources of data:

A case in point, Companies House recently released a beta version of a new People of Significant Control register, but this alone won't complete the picture, given the cross-border nature of corporate ownership structures, shades of grey and different definitions and percentages of beneficial ownership.

Identification is important but where beneficial ownership is concerned, "it's radically different to just plugging in a name," according to Rodenberg. "Historically in Europe everyone talks about the 25% rule," he added, "but there are other rules too. And there are changes in definition, including control. This opens up a box that potentially includes other types of people. Now there's no limit."

Dickenson agreed. "Ownership is never simple with things like nested organisations," he said. "The objective can be to obscure identity – for reasons good or bad. And most companies [aren't required to supply] periodic updates on their ownership registries. In Russia you wouldn't expect it to be accurate and they have a well-established habit of changing owners on day two."

This last observation illustrated a crucial point made by Dickenson and echoed by his fellow panellists:

"When we talk about KYC [know your customer], it's an ongoing activity. You're never done with this process. KYC needs to be repeated and kept up-to-date. You have to think about events that would cause you to have to do this. What are the processes? What if there are changes of signatories? Of addresses? And how do you capture these events to flow into your process? This also ties in with credit. It's an ongoing process."

Rodenberg added that our increasingly globalised world has exacerbated the problem, with complicated, cross-border and ever-changing ownership structures emerging. "They can cover multiple jurisdictions," he said, "some with as many as 18 levels."

He then highlighted that in September alone, 8.9 million entities underwent changes in their ownership structure. "That equates to 12,500 during the course of this webinar," he said, "Some listeners will have these as their clients."

As well as positive identification of the right entity, Rodenberg suggested that analysts must combine multiple sources to get to the top of the chain. "If you break it too early, you don't get to the top," he said.

Motivations for improving your practice

But why do people bother?

Complying with regulations around the world is an obvious but valid answer, as are reputation risk management and improving efficiency in your processes.

But Rodenberg believes it's also good for business. "Generating revenue is one of the main reasons to do this," he said. "When I first tried to open a bank account [here in New York], I was given a 100-page document to fill in. My colleague suggested I go to another bank where they don't ask as many questions." Of course they did effectively ask the same questions but "it was smoother and they were thinking about the client". So they got his business. This analogy applies to this wider space, he suggested.

The panellists rounded off with some apposite predictions for the future but I'd recommend watching the full webinar to hear what they said.

You might also be interested in a webinar we broadcast ourselves on Wednesday. Entitled Unravelling corporate Structures: Understanding beneficial ownership and new tools for due diligence, it attracted over 2,000 registrants from around the world and is free to view at your convenience.

You can now read Data Management Review's own write-up of the webinar. And here's our new white paper, The definitive guide to beneficial ownership, published in November 2017.