6 crucial facts you need to know about modern slavery

Far from being a thing of the past, slavery continues to exist around the world in the 21st century. And, for companies operating in the global marketplace, especially those with large and diverse supply chains, your risk of inadvertently being involved with or implicated in this abhorrent practice might be far greater than you realise.To find out more about this issue, take a look at these six key facts on modern slavery:

There are 21 million victims of modern slavery across the globe

The International Labour Organization (ILO) has collected some sobering facts about the scale of modern slavery. They estimate that currently close to 21 million people globally are subject to some form of slavery or forced labour. Of this number, 9.5 million are men and boys, while approximately 11.4 million are women or girls. Private companies or individuals make up the bulk of exploiters, enslaving 19 million throughout the world. Something that sadly can be traced back to the huge amounts of money that can be made on the backs of the enslaved – the ILO projects that forced labour in the private economy brings in around $150 billion in illegal profits per year.

According to statistics gathered by the UK government, some of the most prevalent types of modern slavery include:

Slavery, in one form or another, exists today in 167 countries. And, whilst the vast bulk of those subjected to slavery live mainly in only five countries – India, China, Pakistan, Bangladesh and Uzbekistan – this issue also occurs in G10 countries.

Despite enacting the Modern Slavery Act in 2015, in an effort to control the spread of this practice, the UK has seen modern slavery levels rise at an unprecedented pace. Figures from the National Crime Agency show a 245% increase in the number of potential victims trafficked to the UK over the past five years. In fact, research estimates that, at this very moment, there could be as many as 13,000 men, women and children suffering as victims of modern slavery in the UK.

The remarkably high incidence of forced labour in company supply chains presents a major issue for many businesses – one that they need to become more aware of and do everything in their power to solve. The organisation Anti-Slavery International notes that, due to the globalised nature of many industries today, it's possible to find evidence of forced labour and slavery at various stages of the supply chain for many everyday products. 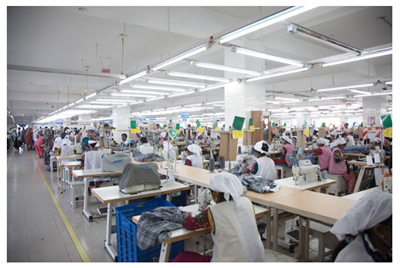 For example, the use of forced labour in the production of cocoa, cotton and the raw materials used to make smartphones means that many companies in the food, textile and consumer technology industries run the very real risk of being associated with the practice.

Whatever sector your company operates in, you should know that you could cross paths with and even become involved with modern slavery in a variety of ways, both obvious and obscure. These span the spectrum from inadvertently dealing with suppliers who are directly engaged in these abusive and exploitative practices to simply procuring goods with component parts originally sourced from companies tainted by a connection to modern slavery. It is in order to encourage companies to educate themselves about and avoid all such situations that The Modern Slavery Act requires businesses to be fully transparent in regards to their supply chains.

Even the slightest connection to modern slavery can harm your business

Being implicated, no matter how tenuously or accidentally, in modern slavery and forced labour practices can have long-term, negative effects on your company. A recent report by the Chartered Institute of Procurement and Supply (CIPS) highlights some of the consequences of having your company associated with products or materials that have been produced unethically. For starters, you can expect to experience a precipitous drop in consumer confidence and a reduced market share. That’s aside from the enhanced possibility of having to face legal action. In fact, if any part of your supply chain is found, or even rumoured, to be involved with the use of forced labour, no matter how tangentially, your reputation and your relationships with customers, the media, shareholders and other stakeholders will be in danger of suffering significant damage.

Due to today's often-complex and even murky company ownership rules, it's prudent for businesses to implement certain procedures designed to help limit exposure to modern slavery through your supply chain. You can go a long way towards making certain that you stay away from supply chain members associated with modern slavery practices simply by staying as informed as possible about the nature of the companies and individuals with whom you do business. This includes being aware of any ownership permutations that might serve to conceal unsavoury connections. Performing this type of comprehensive supplier auditing offers an effective means for you to avoid entering partnerships with or conducting transactions with companies that are tied, in some way, to forced labour or modern slavery.

Importantly, if enough companies refuse to do business with firms that profit from exploiting others, we will have the power to end modern slavery and forced labour within a generation.

The right data for the job

Our Orbis database offers information on more than 200 million companies worldwide, adding greater certainty and speed to your research as you validate and monitor potential suppliers. Orbis also gives you access to environmental, social and governance (ESG) metrics to help you address supply chain issues, such as modern slavery.