As compliance professionals know all too well, tough legislation geared towards curbing money laundering and terrorism financing continues to rapidly grow and expand, both across national and supra-national jurisdictions. The introduction and imposition of new rules and regulations occurs so frequently that it can leave you struggling to keep up with your compliance obligations.

Into this ever-evolving regulatory environment, comes the latest guidance from the EU parliament.

Brought about in part to tie in more closely with the approach of the US compliance regime, Directive (EU) 2015/849 is more informally known as the 4th anti-money laundering directive or, as we'll refer to it here: AML4. As a reminder, the EU defines a directive as: "a form of legislation that is 'directed' at the member states. It sets out the objective or policy which needs to be attained. The member states must then pass the relevant domestic legislation to give effect to the terms of the Directive within a time frame set in the directive, usually two years."

The deadline for implementing the provisions and guidelines of AML4 is 26th June 2017, which is fast approaching.

So, time is running short for compliance and procurement teams to get up to speed on the relevant regulations of this new legislation.
The Directive was prepared with banks and financial services in mind. But there's a big knock-on effect for many corporations, particularly in reputational risk mitigation. So will AML4 affect your company? If so, how? And, what steps can you take to prepare for this directive and to make sure that you have the proper processes and procedures in place to help you mitigate risk and stay compliant? The first step to formulating an effective and efficient strategy for dealing with AML4 would be to familiarise yourself with some of its main points. To help you do that, we've put together a brief summary of this directive's crucial guidelines and policies, split into a section focusing on general key points and another on the all-important area of beneficial ownership:

Expansion of the scope of obliged entities subject to AML controls

In keeping with the constantly changing landscape of compliance regulation, AML4 casts a wider net than its predecessor, AML3, which has been in effect since 2005. The broader parameters of this legislation mean that it now applies to:

AML4 requires that companies place a greater emphasis on risk in their business dealings. To that end, the legislation sets forth a specific list of risk factors1, which companies can use as guidelines as they approach and perform their due diligence, onboarding and other business transactions.

In addition, this legislation also mandates that the EU parliament, as well as the national governments of each member state, undertake assessments aimed at discovering what money laundering risks exist on a national or supra-national level.

The directive specifies that companies go through a harmonised list of checks when dealing with businesses in high-risk third countries, defined by the EU as: "countries with deficiencies in their anti-money laundering and countering terrorist financing regimes." An official list of who these risky third countries are (which exactly mirrors a list previously compiled by the supra-national Financial Action Task Force [FATF]), will be formally published on 14th July, 2017. This list will be updated three times a year.

In cases where companies are found to be breaking the rules or flouting the guidelines of the directive, AML4 empowers and encourages member states to crack down on offenders using a set of very strong financial sanctions. Additionally, companies that run afoul of the requirements of this legislation could also be subject to reputational damage, as member states are also being urged to "name and shame" offending companies by publishing their breaches of the regulations publicly.

AML4 places a great deal of focus on the identification and monitoring of beneficial owners. In addition to beneficial ownership, as determined by the amount of financial equity that an individual holds in a company, this legislation also places importance on people of significant control (PSC). PSCs are those whose position and power within a company are influential enough to constitute control, regardless of their ownership percentage. Examples of PSCs could include CEOs, directors and the like.

Some of AML4's requirements in regards to beneficial ownership include:

The UK has already formed its own national register, in advance of the deadline set in place by the directive. However, it's worth noting that, while efforts to make them available are to be applauded, these national databases of beneficial owners, as evidenced by the UK register, can sometimes be incomplete or even inaccurate.

Due to their reliance on companies' self-reporting and that the information supplied isn't checked by government officials, these registers often have gaps in their records or even incorrect data. Most of these gaps and errors will be unintentional but that's not always the case, and when screening customers and suppliers you still have an obligation to uncover genuine beneficial owners and PSCs.

Now, in addition to authorities tasked with enforcing this legislation and companies subject to its regulations, anyone with a "legitimate interest" will also be granted access to beneficial ownership information. This increased transparency is a double-edged sword, making it extremely difficult to claim ignorance if confronted with breaching any of the directive's regulations regarding beneficial ownership.

Crucially, this regulation means that compliance professionals will first need to be aware of the risk associated with a potential business partner or customer, before then proceeding to check its beneficial owners. With the already-mentioned imperfections in the national registries, that places another level of responsibility on your shoulders. Luckily, Bureau van Dijk can help you stay in compliance quickly and more easily.

What this means for compliance professionals

With its broader, and yet simultaneously more honed-in, regulations designed to hold companies accountable for any connection – whether intentional or incidental – to money laundering or terrorism financing, AML4 places a great burden on compliance professionals. The directive's requirements create a very narrow path for companies to tread in order to avoid crippling financial sanctions or damaging hits to their reputations.

If it's your job to make sure that your company complies with the rules and regulations of AML4, the challenges you face could seem daunting, if not overwhelming. Even with the mandated list of risk factors and the national registries of beneficial owners, there are still many opportunities to innocently or inadvertently miss that crucial piece of information that could place you on the wrong side of the AML4 legislation.

"With talk of AML5 on the horizon and the progress of the UK's Criminal Finances Bill, the regulatory burden continues to shift upwards, even for those more 'generalist' compliance functions out there," says Ted Datta, director of GRC solutions at Bureau van Dijk. "We're heavily employed across London's emerging fintech sector, and more established real estate firms, to implement solutions that off-set risk while super-charging the on-boarding process to the benefit of the firm and most importantly, their clients."

And we're engaged in similar activity in continental Europe.

By harnessing one of our company information databases – such as Orbis, which covers more than 200 million companies worldwide, or Compliance Catalyst, which, when used with Orbis, offers specific features geared towards meeting compliance regulations – you'll be able to more efficiently and rapidly access and use the information you need in order to mitigate risk and stay compliant.

You might find our corporate ownership tools particularly valuable, especially in light of AML4's increased emphasis on beneficial ownership. For example, the ability our solutions give you to set your own level of ownership percentage threshold, based on your appetite for risk, when assessing potential business partners or supply chain members might come in especially handy with the directive’s expansion of the definition of beneficial ownership, in certain high-risk cases, to include those parties with a 10% stake in a company.

No matter what your tolerance for risk, the current regulatory landscape provides an added reminder of the importance of not just trusting information, but also verifying it. On your own, you might need to spend an inordinate amount of time and resources checking all the risk factors mandated by AML4. However, with the help of one of our compliance solutions, you'd be able to perform your due diligence, onboarding and other verification procedures faster, with increased efficiency and with a greater level of certainty. 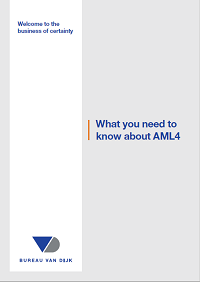 As deputy CEO, Mark is passionate about delivering user-led information solutions that offer sophisticated functionality, with a great user experience.

As deputy CEO, Mark is passionate about delivering user-led information solutions that offer sophisticated functionality, with a great user experience.