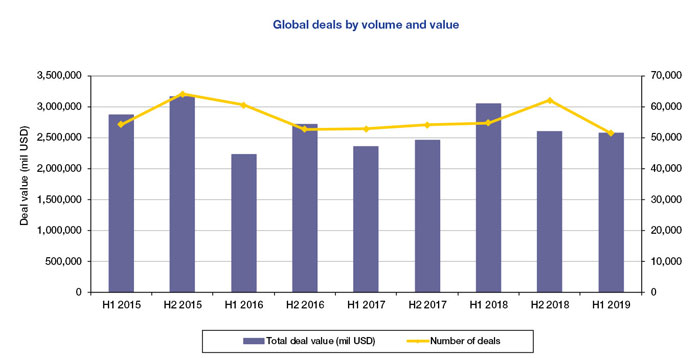 The only regions in which value improved were in North America and the Middle East and North Africa region. US companies accounted for 16 of the top 20 global deals in H1 2019.

“The decline in global M&A volume and value recorded in the first half of 2019 is undoubtedly disappointing, but there is still some cause for optimism,” said Claude-Vincent Gillard, managing director, data and partnerships at Bureau van Dijk. “High-value deals, such as the Celgene and Saudi Basic Industries takeovers, are still being announced, proving there is an appetite for deal making. Results for North America and MENA have also been fairly positive, showing some glimmers of hope. Time will tell how the situation develops over the second half of the year, but there is every chance we could see an upturn in activity levels as we move towards December.”

The value of private equity (PE) and venture capital (VC) deals announced in H1 2019 increased compared to H2 2018, even though volume decreased by 306 deals during the same time time frame. There were 5 PE and VC deals worth more than $10 billion in H1 2019.

Both value and volume was down for PE and VC deals compared to H1 2018, however, during which time Blackstone acquired the US industrial warehouse properties from GLP for $18.7 billion.