Impassioned but good-humoured debate raged at the now-annual fixture, during which a panel of six guest experts discussed their diverse views and experiences of company credit risk assessment techniques. 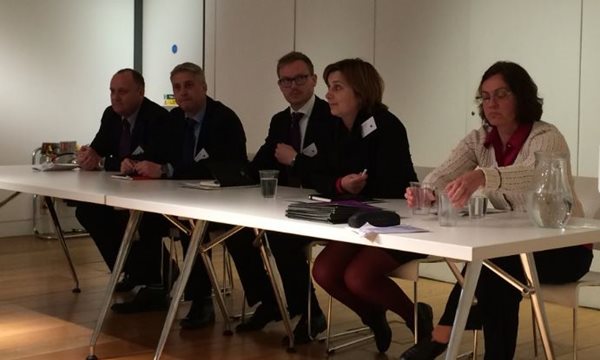 The general focus was on how private companies' creditworthiness can be appraised, both quantitatively and qualitatively, in relation to decision-making for corporate sales or banking loans.

Kicking off the presentations was John Bowler, director of country risk at the Economist Intelligence Unit, a   long-standing partner of Bureau van Dijk's. 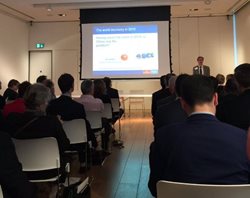 As a useful backdrop to discussions, Bowler provided a pithy overview of today's economic and geopolitical landscape, showing our journey from 2008's banking crisis onwards. A key theme was China, which he characterised as the world's economic "saviour" during the crisis. Given such factors as rising levels of internal debt, he now sees it more as a "survivor".

But how can you reliably assess companies that don't make their financials available? The thrust of his talk, Sorrentino addressed this question with a detailed exploration of modeFinance's qualitative modelling methodology, discussing the weightings used for various parameters.

The company's models produce not just a credit score but also a confidence score, based on the amount and type of available information, which analysts should also factor into their decisions. But ultimately the qualitative model's ability to predict whether a company will default is significantly better than the "random model", as shown in the graph here.

Provoking the most questions from the floor was Hans Henrik Bendtsen, senior credit risk manager at Lego's Danish headquarters, who described the company's move from outsourced credit management to an in-house corporate credit risk department as a way to "improve [the] basis of credit risk decision-making on customers," balancing "financial and commercial risks and opportunities".

With Bureau van Dijk's Credit Catalyst as its hub, the new process involves blending company information from our Orbis database of 200m companies with Lego's own customer data to generate a "Lego Credit Score Card". This informs the risk department's recommendation but, interestingly, it's left to the sales team to make the final decision on whether to extend credit to these potential customers, a point that ignited lively exchanges with the audience.
Off-shoring

Czech Republic-based Briton Mark Harrison, founder of the Association of Credit for Central and Eastern Europe, offered an alternative viewpoint on the "shared service journey", highlighting the challenges and pitfalls of an option that ultimately has a number of benefits.

Harrison presented a case study based on his own experience of a transition to a captive shared service centre, and offered valuable insights into how extensive strategic planning is the essential component.

He highlighted that all order-to-cash functions should aspire to be "process owners" and "centres of excellence" through a combination of talent development and technology. This approach, he argued, would yield maximum benefits, achievement of KPIs and efficiencies.

Finally, we were treated to an overview of the revealing academic research produced as a result of collaboration between Dr Galina Andreeva of Edinburgh Business School and Dr Raffaella Calabrese of the University of Essex.

Entitled "Modelling a small business failure: a comparison between Italy and the UK", their study highlighted the significant differences of approach when lending to individuals compared to businesses, the latter being the focus of their work.

Andreeva and Calabrese set out to explore a number of questions relating to predictors of SME failure, including the power of financial variables, and how "generalised extreme value models" compare to logistic regression. This was high-level material but the educated audience remained engaged throughout, reacting with particular interest to unexpected findings, such as the non-linear relationship of certain factors, such as a company's total assets or its liquidity ratio, as shown below. 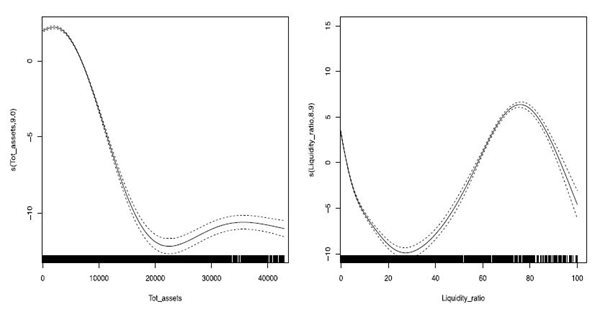 Formal discussions of liquidity concluded, delegates and panellists repaired to the Museum of the Order of St John for an opportunity to chat with liquid refreshments.

We look forward to more next year.

Earlier this year we produced an extensive white paper on internationally standardised credit risk, which featured contributions from modeFinance.

The white paper examines the benefits of a credit risk picture based on globally standardised company information. It discusses the methodology behind delivering one. And it shows how adopting such an approach can help your business.

The credit world is reinventing itself, and credit specialists need a transparent, coherent and global view of their customers. This paper puts this assertion in context and includes: