Highlights from our AML4 and sanctions compliance forum

Last Wednesday saw our UK office host an AML4 and sanctions forum, which took place in sunny Barbican, opposite the Museum of London.

With the looming 26th June deadline for national implementation of the EU's fourth anti-money laundering directive – or AML4 – acting as a prominent backdrop, a compliance scene that's been heating up since last year's Panama Papers revelations, and increasing sanctions regimes, there was plenty to talk about from our collection of esteemed speakers.

If you couldn't make it, don't worry; our highlights follow. And if you were there, thanks for coming!

"Data is the new gold" 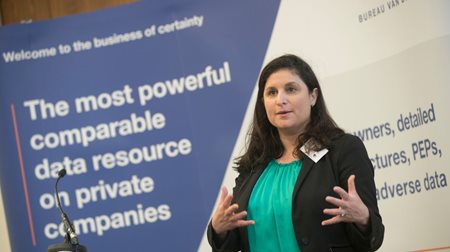 Akoni's platform "helps SMEs maximise the return on their cash deposits quickly, easily and securely". But before marketing to potential clients, the company has adopted a new approach to pre-qualifying prospects according to their financial strength using Bureau van Dijk's Fame database, illustrating Felicia's claim that "data is the new gold".

Coupled with a PEPs, sanctions and beneficial ownership check through our Compliance Catalyst, this pre-qualification means that clients that make it through can then be onboarded on Akoni's KYC platform extremely quickly.

Anthony Cosgrove MBE, co-founder of HARBR, was on next to deliver a talk entitled: "A data-first approach to addressing financial crime – a shifting paradigm?"

After years using intelligence data to combat financial crime in big banks, Anthony started HARBR to help companies store and access AML and other data in the cloud.

Data is currently too siloed, said Anthony, and "trails can go dead" when people move across boundaries. His hope is that in time there will be a shift towards sharing data across organisations, something that HARBR is well-placed to support.

We need to "take a 'data-first' approach to detecting financial crime," he asserted, involving the "aggregation of relevant, accessible and proportionate data in a cloud infrastructure," with platforms that utilise "natural language processing, machine learning, and API-driven search automation".

He acknowledged that this could lead to challenges over data privacy, particularly with the EU's General Data Protection Regulation (GDPR) on the near horizon – its enforcement date is 25th May 2018. 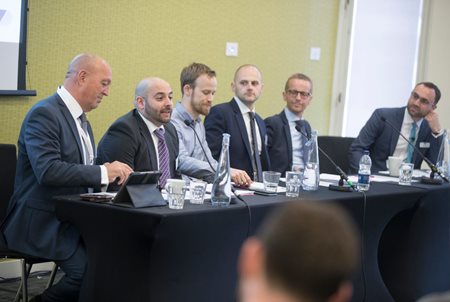 A prominent theme to emerge from a broad range of topics was that of shifting risk assessment expectations. The move from AML3 to AML4 is bringing about slightly less of a risk-based approach and more of a "this is what you must do" mentality, observed Amasis.

This overlapped with discussions on "tick-box" compliance, the inherent problems of asking clients for information during the onboarding process, and the mixed blessing of People of Significant Control (PSC) registers, which blurs the boundaries between ownership and control.

And there was a consensus that cultural differences from one jurisdiction to the next play a huge part in determining what's possible or realistic when looking for information on third parties.

ESG and the "new normal"

In our penultimate presentation and continuing with reputation risk, Alexandra Mihailescu Cichon, head of sales and marketing at RepRisk, spoke on environmental, social and corporate governance (ESG) risk.

We've been working with RepRisk since last autumn and have become well versed in the complex, varied and very real reputational risks that companies face.

Alexandra attributed these increasing risks to three "megatrends": transparency becoming the "new normal"; increased stakeholder expectations; and moving from "soft" to "hard" law. She also highlighted that there are around 300 regulations that cover ESG, with many more in the pipeline – the UK is leading the way in modern slavery regulations, for example, and other countries are expected to follow. Last up before a networking session – and well aware of it: "I know I'm the final person between you and some drinks" – was Dr Daniel P. Ahn, deputy chief economist at the US Department of State (pictured here in the middle, flanked by senior Bureau van Dijk staff at a reception afterwards).

Daniel spoke engagingly and persuasively on the subject of targeted sanctions, also known as smart sanctions. These are sanctions on specific individuals or entities, rather than entire countries, and they emerged as a result of the 2014 crisis in Crimea.

As an economist Daniel was tasked by the US government to measure the effectiveness of these sanctions. Have they had a measurable impact on their targets? The short answer is yes, and it's very significant, something that Orbis data helped demonstrate by providing financial and other types of granular information over a period of time for targeted companies and a wider control group of unsanctioned entities.

We wrote about this in more detail in a blog post in February, where you can download the full working paper, so I won't elaborate here.

But I will point to an interesting subsequent observation of Daniel's: subsidiary companies also seem to be impacted even if they fall short of OFAC's "50% rule" threshold of controlling ownership, and he suggested that this couldn't be entirely attributed to negative financial "spill-over" from the parent companies.

In other words, sanction screeners are identifying companies whose minority owners are sanctioned and deciding not to do business with the subsidiaries even though they legally could.

This, to me at least, suggests an increasing cautiousness among compliance professionals. Is that because they want an easy life? Do they fear hidden ownership connections that would push controlling ownership above 50%? Or do they just want to do the right thing?

Whatever it is, there's an appetite for third-party identification and empowered decision-making. And, as a representative of a company that aims to facilitate this, I find this encouraging.

Don't forget to register for our free webinar on 28th June, Beneficial ownership – have you got it right?

I'll be joined by Keith Furst, founder of Data Derivatives, and Bill Hauserman, senior director of compliance solutions at Bureau van Dijk, and we'll ask:
What does it really mean to identify, validate, and monitor companies and their owners? Do you need to redefine your risk-based approach?

And we'll discuss smarter ways to integrate beneficial ownership information into your compliance processes, so you can focus on higher-level decision-making and spend less time on data discovery.

Drawing on a recent case study, we'll show how corporates, banks and FIs can learn from measures already taken by some financial sector practitioners; those adopting a more risk-based approach to this area of compliance.

Find out how you can improve your operations by: